The USA election between President Donald Trump and former Vice President Joe Biden is coming up and the campaign is in full swing! You didn’t have time to watch the debate? Don’t worry, TAWNY Emotion AI uncovers the best emotion insights of the protagonists in this article. 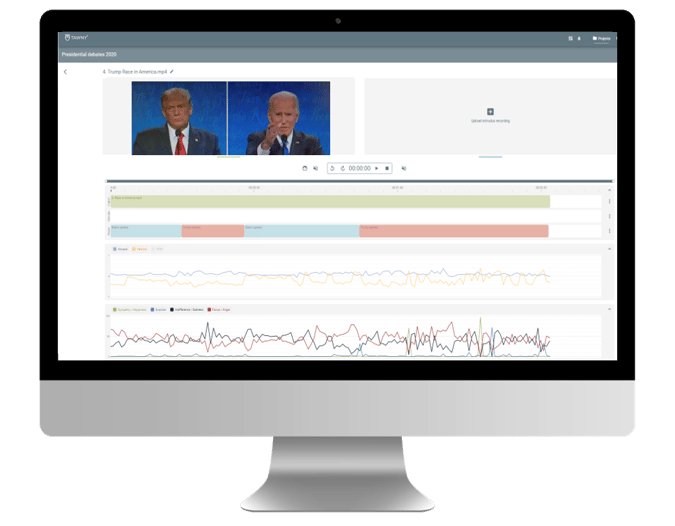 TAWNY, expert in Emotion Analytics analyzed the five main topics of the debate with its Emotion AI technology: Fighting Covid-19, National Security, Health Care/American families, Race in America, and Climate Change. It was a true rollercoaster ride for both candidates. Overall, negative vibes dominated the conversation with the average valence score (-1: highly negative, 0: mid-range: 1: highly positive) always being below zero. Trump was the most negatively activated when speaking about Covid-19 and Biden about National Security. Most positive emotions were shown during the Health Care/American Families topic for Trump, and Climate Change for Biden. On average across all topics, Biden was the “cooler” actor with a much lower arousal score (a range from calm to very excited) than his opponent.

Covid-19 was the first hot topic on the agenda and it definitely got heated. Out of the five main topics that they debated about; this was Trump’s least favorite. He showed the most negative emotions during the discussion, whereas both Trump’s and Biden’s average arousal levels were comparable.

Using emotion tracking, TAWNY could identify that Biden did not hold back showing his unhappiness to the way that President Trump handled the Covid-19 crisis during the past months. His negative valence peaked when he said:

See number 1 in the graph:

Interestingly, when Biden accused Trump of taking no responsibility for the situation, Trump actually showed the most positive emotions stating:

See number 2 in the graph:

“I take full responsibility. It’s not my fault that it came here, it’s China’s fault.”

… hmm sounds a bit contradicting? Perhaps this is a part of his tactic.

The second topic on the agenda was National Security, clearly visible to be Biden’s least favorite topic of the evening but still remaining calm. He was very keen to clear up some suspicions regarding Trump’s connections to Russia and Iran, as well as his disappearing tax returns.

Trump went from his highest to his lowest valence score when Biden said:

... China is building a new road to a golf course you have overseas, So what's going on? Release your tax return or stop talking about corruption.” (most negative valence)

Trump did some accusing himself, making Biden sweat. There were 5 occasions where Biden’s heart rate went up over 80 beats per minute. We use a technique called remote photoplethysmography, which is just a fancy word for "analyzing the subtle changes of the subject's skin color which correlate with their heartbeats".

On the other hand, we did see two big smiles from the former vice president – although sarcastic ones at such. The highest sympathy-happiness level was reached when Trump said:

“First of all, I called my accountants under audit. I'm going to release my tax returns. It will show how great this country is."

Third topic of the evening was health care and American families. Interestingly, this was the topic where Trump and Biden’s valence and arousal levels were the most similar to each other. Who knew? Maybe there is one topic in this world where they can actually agree on something?

“He was there for 47 years. He did not do it. He was now there as vice president for eight years, and it's not like it was 25 years ago. It was just a little while ago, right? He did not do anything. “

Moving on to the fourth topic, Race in America. This discussion revolved around immigration and the highly controversial topic of the border to Mexico.

During this sequence, Trump showed a lot more volatility (up and down) in his emotions than Biden that stayed calmer and more collected. Overall, the atmosphere in the room was very tense with both candidates expressing similar levels of negative emotions.

Donald Trump’s emotional leaps were at their highest point during this section where he criticizes the catch and release strategy stating that:

As a reaction to the last comment, Biden just shakes his head and has a decline in valence for obvious reasons.

The fifth and FINAL topic that they debated about is Greta’s favorite topic, Climate Change. During this sequence, the candidates had very similar arousal levels but showed large differences in valence as this was the topic where Biden showed the most positive engagement. Although Trump was generally not so amused, Biden managed to get 3 smiles out of him.

The conversation was actually quite amusing... it revolved mainly around windows? Small windows, big windows, no windows... Wait, what was the topic again? Oh right, climate change.

Biden argues that America’s future lies in its ability to breathe clean air, while accusing Trump of thinking that wind causes cancer. This resulted in Trump’s highest valence score whereas Biden laughed at his counter-argument “I know more about wind than you do.” Great, that’s what everyone looks for in a president right?

The evening ended with a one-minute speech from each candidate about why they should get elected. Convinced? Now it’s your turn, American friends – go vote!

TAWNY Emotion AI SaaS software can conduct facial expression analysis from video material for many different use cases. The benefits are:


Interested in learning how you can utilize emotion AI? Just send us an email – we would love to hear from you.

Bits & Pretzels - We are in again !!!
Ever heard about A ffective Computing or Emotion AI ? No?! Come and visit us at our...