"Social robots" - what do you understand by this term?! What are the current technological advances in the field of artificial intelligence? How do these affect health, education, and the labour market? 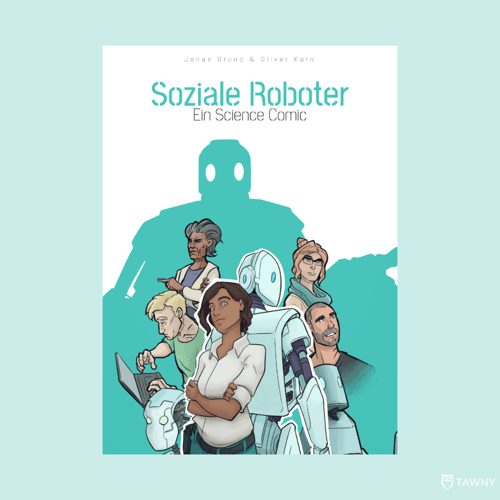 With the benefits of robotics, artificial intelligence, and affective computing, the relationship between robots and humans in society is changing. Does a faraway future is now becoming reality. Are we ready to include robots in our daily lives? Do we really want them to be part of our most private matters? Does this feel human at all?
We guess it is still a controversy discussed topic?!
While some may perceive this future as bright and promising, the majority probably anticipates this development with reluctance, if not fear?
And what about empathy?
Isn't this also a necessary characteristic of robots to be seen as more human beings? This is where TAWNY would enter the "playground" as we deliver the emotional quotient to things and services.
Learn more about these questions and solve a thrilling crime story. Dive deeper into it and take a closer look at the new science comic on #socialrobots by Prof. Dr. Oliver Korn.
https://aci.hs-offenburg.de/.../soziale-roboter-ein.../
Enjoy reading!
#empathicAI #empathy #affectivecomputing #ai
Prof. Dr. Oliver Korn, head of the Affective & Cognitive Institute (ACI) at Offenburg University of Applied Sciences, is the idea generator and scientific author of "Social Robots - A Science Comic". Graphic designer Jonas Grund immersed himself in the world of science as an employee of the ACI and incorporated his experiences into the comic. With the comic, the authors convey in an easily understandable way a current state and outlook of the sciences in the field of social robots and artificial intelligence. They thus offer a basis for a broad social debate.

If you are more the visual type ;) find the flip-through video down here.

TAWNY  - Detecting the DNA of FLOW: It was a real pleasure to meet the future biathlon stars at Lenzerheide and make some sporty visionary AI -TAWNY measurements.